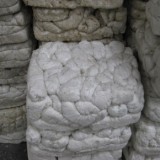 Given some time solutions have a way of being discovered. About two generations ago we were worried about the accumulation of physical rubbish, petrol causing pollution in the atmosphere, the ozone layer being depleted. But new technologies have since managed to deal with at least a few of these concerns, and other emerging technologies are looking to deal with the rest of the environmental concerns.

Solar energy looks to be a good alternative to many home power needs. This may not cover ever situation, because the Sunshine is not there every single day, but it can massively reduce power from the main grid, thereby reducing the use of coal.

There has been concern for polystyrene in the environment. But a combination of developing technology and an accidental discovery have changed that. Firstly, Technology has developed ways to compress the polystyrene, which was mostly air. This was an issue in the past as the polystyrene took up a lot of space, making it expensive to transport. But compressed polystyrene is far easier to handle.

The accidental discovery was that mealy worms can eat polystyrene, removing it from the environment entirely. These worms can then be useful as fishing bait or for feeding birds.

If your business used polystyrene, as many do for transporting delicate equipment, so it can then be compressed for easy disposal or recycling. polystyrene can be used for building products, used for worm feed, or safely disposed of.